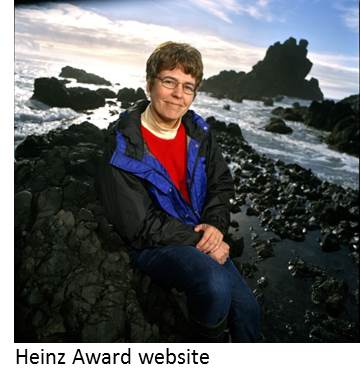 One of the many challenges that scientists face is the ability to talk science to non-scientists. As graduate students and postdocs, we are trained to speak the language of science to our colleagues, peers, and students, but rarely does this training extend to the general public. Recently, Jane Lubchenco (marine ecologist, distinguished Professor of Zoology at Oregon State University, and former administrator of the US National Oceanic and Atmospheric Administration, NOAA) gave a talk at the University of Wisconsin-Madison as part of the Aldo Leopold Lecture series. Her focus was on communicating science at the science-policy interface but her tips (below) extend to communicating science to just about anyone. Her first tip was to tell stories. Stories are more memorable than stating facts. Politicians do this all the time. So, through 7 short-stories, Jane shared some lessons about effectively communicating science to non-scientists. To hear Jane tell her stories first hand, visit http://vimeo.com/92966641. (Note: this video is not the Aldo Leopold Lecture but a similar lecture given at NatureServe.)

Context: No PowerPoint, no visual aids. Just Jane, her iPad, and her stories.

Find common ground. Engage with your audience and show respect.

Story #1: During Jane’s confirmation hearing for the NOAA position, her coach gave her advice on how to relate to senators and other politicians at the hearing. Build relationships. Find common ground. Engage with your audience and show respect. She took this advice, meeting with committee members individually beforeh 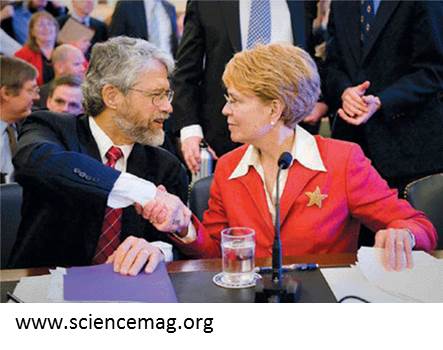 and and listening to their concerns, and finding a bit of common ground between herself and committee members (e.g. familiar places, people, and interests), some of whom she shared very little in common. As a result of building these connections, she flew through the confirmation hearing without any problems. On the other hand, John Holdren (another NOAA nominee) received different advice from his coach and was not so fortunate at the hearing. (But Holdren is doing just fine right now as senior science advisor to President Obama).

Find out what your audience knows so that you can relate it to the unknowns. Don’t take knowledge for granted and assume they know what you know.

Story #2: Maintaining satellites is essential for the functioning of NOAA but convincing others is always a challenge. One man at a town hall meeting didn’t think satellites were important and a waste of tax-payer money because “We get our weather information from the weather channel on TV”. At that point, Jane had to step back, go back to the basics and explain to him how the weather channel gets their information to make forecasts; from satellites.

Analogies are helpful in explaining difficult concepts and phenomena, such as climate change. Finding the right analogy is difficult but once you have one, you should share it.

Story #3: We can’t know if climate change is to blame for any one storm or drought but we can know that climate change causes more storms and more severe droughts over the long run. Analogy to a sports fan: A baseball player on steroids. Which of Mark McGuire’s home runs, in particular, did he hit because he was on the juice? It’s impossible to say but we know he hit more balls out of the park than he would have if he stayed clean. Climate change is like weather on steroids.

Scientific information can be valued. You might have to change the incentives.

Story #4: Jane was intrigued by the difference in dialogue between government officials in Washington DC compared to local and regional officers. In light of the severe drought in the western 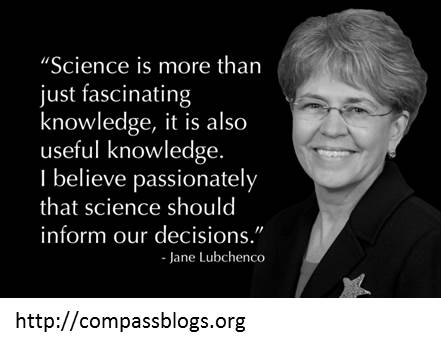 US, NOAA was asked to provide long-term weather information, so that governors in western states could plan and prepare for the future. When Jane asked one western governor, who has publically stated that climate change is not happening, “how can you reconcile your denial of climate change and your need for NOAA’s help on long-term weather forecasting”. He said “It’s easy. I don’t care whether you call it ‘climate’ or ‘long-term weather’; I just need information to plan”. It was then that Jane realized that people WILL value the scientific information scientists collect. You just might have to change the incentives and packaging, and separate this information from the strong political overtone of Washington DC. 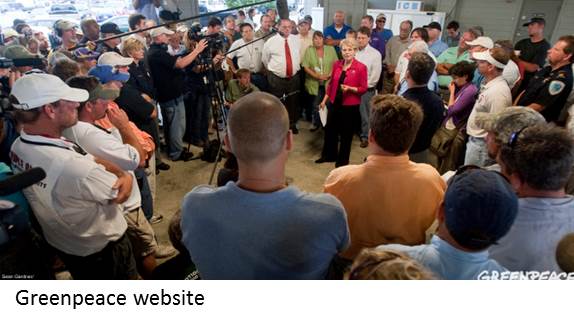 Story #5: Before a press conference, Jane briefed Vice President Biden on the responses of marine organisms to the oil spilled from the Deep Water Horizon. She explained how toxins in oil can influence marine organisms differently; some are able to detoxify themselves while others cannot. Therefore, we need on-going monitoring and repeated testing to evaluate the health and safety of our waters and fisheries. VP Biden told her, “Hold on a minute. I don’t believe you are a scientist. I understood everything you just said.” Previous science advisors were not able to make science accessible and understandable. 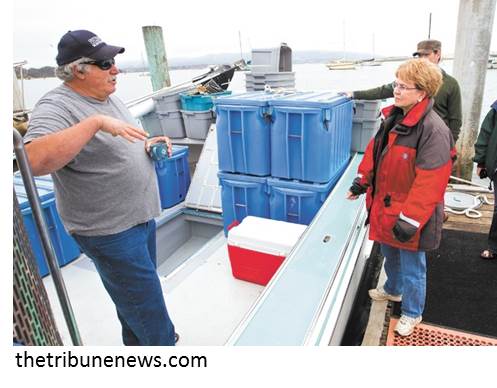 Story #6: In efforts to finally end overfishing in US waters, NOAA instilled a new fisheries management plan to align both conservation and economic needs. Since then, 32 stocks that had been seriously depleted are now starting to rebuild. A long-time fisherman, who had discouraged and concerned about the future, told to Jane “Thank you, I can finally see the light at the end of the tunnel”. Change can happen but it requires bipartisan support, consistency, and credible sources.

Nobody but a scientist would think so logically to solve problems. 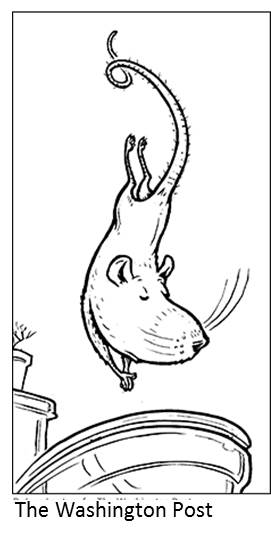 Story #7: When Jane started her position at NOAA, she encountered a large, WET, black rat in her office in the NOAA building. Both she and the rat were startled, the rat quickly ran away, and dove into the toilet.

Jane figured out the rat was coming through the sewer pipes that were dried out from infrequent use (her new office had been vacant for months). She conducted an experiment where she flushed the toilet on a regular basis to remove the air pockets that had developed to keep the rat from coming back. It worked. The rat never came back… but it took her a few days to start using that bathroom.

Aside: the Washington Post got a hold of this story and drew a carton  of a rat swan-diving into the toilet with the headline “NOAA’s Ark”.

Final lessons from Jane Lubchenco about the science-policy interface:

This article was posted in Lab Blog.